Last Saturday, I had the pleasure of meeting a woman named Terry Fear.  I was planning a Zoom panel discussion for a group of community lay leaders where I live in Arizona; the topic of which was to be the federal death penalty.  Terry, an activist who lives near Terre Haute, Indiana (home of the Bureau of Prisons death house) was recommended to me as a possible panelist.  I reached out to her, she was game, and so we set a Zoom call to get to know each other and prepare.

In the short time we spent together online, I found Terry to be soft-spoken, humble and passionate.  She was a retired school teacher who now served as a volunteer in her community, active in interfaith groups and other organizations.

She came to be a death penalty warrior late in life.  She told me how, not long ago, she was called upon to draft an anti-death penalty statement on behalf of a local group.  A little embarrassed, she recalled that it was a challenge for her because that up until that point, she had never really given much thought to the subject. As she dug in and began the work, she educated herself on the racist roots of the American death penalty; how it became a systemic, state-sponsored substitute for lynching, and how the system is flawed in so many other ways. The more she learned, the more the fire started to burn inside of her.

It would not be long before the administration ramped up the machinery of death, and she knew that those murders would happen right down the road from her own house of worship.  Before 2020, our country had gone 17 years without a federal execution.  There have now been 10 executions in 20 weeks, with several more planned before January 20th.

Terry knew she had to do something, but what?  What possible difference could one retired school teacher from a small town make?  She made a sign, she grabbed a lawn chair, and she went down to the prison.  Night after ugly night when the government snuffed out life in our name and with our tax dollars, Terry Fear was there.  One voice,  bravely making it heard.  Her passion was infectious.

The most poignant moment in our talk was when she confessed how nervous she felt about her place on the panel I was assembling.  She had reviewed the list of participants, which consisted of the executive director of Death Penalty Action, esteemed and accomplished clergy, and a Harvard educated death penalty defense attorney.  She said, “I don’t know that I’m worthy to be on the same bill with all of these incredible people.”

I was moved by her humility.  I took a breath, as I tried to put my own emotions in check.  I leaned in to the little webcam perched atop my monitor.  It was the closest I could come to looking her in the eye, and I told her: “Terry, none of the people watching this program are ever going to litigate a capital case.  They are never going to write books on social justice.  They are not going to be the head of an abolitionist organization.  They’ll never be them, and that’s okay.  We don’t need more of them. We need more of you.  I need them to care about this like you care, and I need them to know that they can get up, get out, and do something.  I hope you know, Terry, you are the true rock star of this panel.” 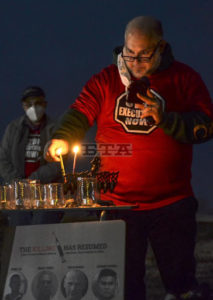 Tribue-Star/Austen Leake – Lighting a menorah: Abe Bonowitz, co-director of Death Penalty Action, lights a menorah after saying a prayer across Prairieton Road from the federal prison complex on Friday to protest the execution of Alfred Bourgeois.

She gave me a sweet smile and thanked me.  I was with Terry on that Saturday Zoom call for maybe forty minutes.  It certainly didn’t take that long for me to understand that our meeting was pre-ordained.  I left feeling energized and grateful that I had found this new kindred soul in the heartland.  I couldn’t wait to see her light shine at my little event.

A few days later I received a voicemail from the death penalty advocate who introduced me to Terry:  “Doug, this is Mike.  I have some bad news for you, Doug. Some sad news.  We lost Terry Fear.  You were one of the last people to talk to her in this capacity for abolition.  We’ll continue to fight on with her by our side.”

I was told Terry suffered “a coronary incident”.  With the Chanukah executions of Brandon Bernard and Alfred Bourgeois just days before, I can’t help but wonder if she died of a broken heart.  She had brought her menorah to the vigil at the prison.  In the darkness, she and her brothers and sisters in the movement lit the Chanukah candles for love, for life, and for hope.

There are those among us who remain blissfully unaware of what is happening and why it matters.  Many of us truly do care, but say “Who am I?”  “What difference can I make?”  The truth is, every one of us has the power to be a Terry.  One small voice can cut through the noise. We call this the power of one, and it is real.

In the end, when the battle is won, and I believe it will be, a retired school teacher on a lawn chair with a prayer book on her lap will be remembered as a hero of the abolitionist movement.  So, please, make your sign, put on your mask, pull up a chair, and let’s get to work.

If you feel moved to honor Terry and her legacy, may I suggest a donation to the group she worked so closely with in her abolition efforts, DEATH PENALTY ACTION.  To view a short video on their work, filmed at recent event in D.C., please click HERE.

May Terry’s memory be a blessing, and may we see a future free from killing in my name and yours.