Inside The Staircase: Lessons from the Michael Peterson Murder Trial 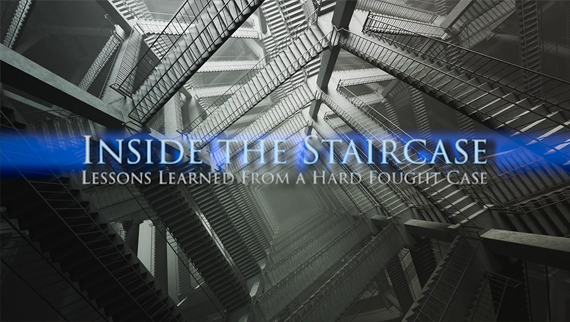 Inside The Staircase: Lessons from the Michael Peterson Murder Trial

He said she fell. The state said it was murder. It became The Staircase.

On December 9, 2001, Michael Peterson, veteran and author, living in North Carolina with his wife Kathleen, called emergency responders to assist with his wife whom he found at the bottom of the stairs in their home. What would ensue would be played out across the national and international media - secret lives, million dollar insurance policies, and one of the longest trials in North Carolina history.

Oscar-winning filmmaker Jean-Xavier de L’Estrade chronicled the prosecution of Michael Peterson as it was unfolding . The filmmakers gained unprecedented access to Peterson, his legal team, his family, and the state as they investigated and tried the case. The result is the first and best true crime documentary series, “The Staircase” (currently streaming on Netflix).

Using clips from the film, including never-before-seen footage, lead counsel David Rudolf appears in this illuminating 3-hour series with an all-star panel of guests to tackle some of the most important and areas of the law that any criminal practitioner will encounter, including cross-exam of experts, junk science, other acts evidence and ethics.

Even though this seminar wasn’t within my area of practice, it was great to hear such nationally recognized experts speak on such compelling subject matter.

One of the Best CLEs I’ve attended – informative, entertaining, and very well planned. In this free CLE, learn how to use visual, emotional-based storytelling at the sentencing and penalty phase.

Something went wrong. Please check your entries and try again.
Get Access Now

I had heard about Passon's work for years. It was great to get the chance to see it for myself. Good combination of inspiration and nuts/bolts information!

By far the best and most effective presentation. More video, please!

I'm preparing my first sentencing memo since I heard you speak. I'm so proud of myself for scanning and inserting old photos and articles into my sentencing memo. You have literally changed the way I now think about sentencing!

I attended your seeing is believing training and absolutely loved it. I am trying to incorporate more visuals in my work. Do you have any more similar upcoming trainings?

I’ve had success Implementing your methods mostly with county deviation requests and working towards charge turndowns.